Lunch is Booked Out !!

Round 16 on the 13 August will see the Seniors and Reserves returning to EE Gunn Reserve for matches following an extended 10 week period of away games, due to the reserve being used for the railway undergrounding project. A big Lunch is planned before the blockbuster match against new rival, Kew.

Past players and officials particularly, are being welcomed to the Lunch, as well as all 2016 Club sponsors and supporters. After a very popular meal served at the Ladies & Grandparents Lunch in May, Jimmy Grants Restaurant (North Road) will again be providing the food and other culinary delights for all to enjoy. Guests will be treated to a two course meal comprising dips, pita bread, roast lamb or chicken, roast potatoes and salad.

A rare opportunity to hear one of Australia’s most prominent sporting club CEO’s speak will be a bonus for all attendees. Ian Robson will talk to guests about his time at the helm of the following National sporting clubs:

The Club is indeed privileged to have such a decorated sports administrator available for the function.

Cost is $35 per person, bookings and payment can be made via this link.

If you have a complimentary lunch coupon and you wish to use it for the Lunch, please email David Symes, or contact David with any other enquiries on mobile 0438 066 406 or email das9@optusnet.com.au, including if you wish to book but pay by an alternate method. 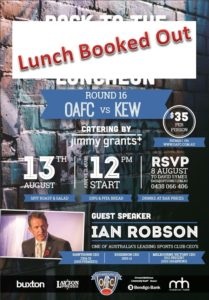