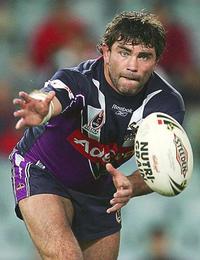 Following the successful introduction of the Fifth Day Lunch series last year, the Ormond AFC is pleased to invite all supporters, friends and community members to the first Lunch for 2018.  And what a ripper guest speaker to entertain guests – Melbourne Storm legend – ROBBIE KEARNS.

Robbie was a foundation player for the Storm when he joined the club in 1997 for its first season in 1998.  He played 169 games for the Storm before his retirement in 2005.  During his Storm career, he captained the Club between 2000-02, was a premiership player in 1999, played 8 State of Origin matches for NSW, and 17 Test matches for Australia, including the victorious World Cup team in 2000.

The first Fifth Day Lunch will be held on Friday 20 April in the function room of generous Club sponsor, the McKinnon Hotel, commencing 12.15pm.  The cost is $75 (all-inclusive), and for payment by credit card, click here.

The Fifth Day Lunch is open to all, irrespective of whether you are a long time or a short time supporter of the Club, a local business person, associated with another community group, or just a local resident wanting to meet other local people.  Guests will enjoy a delicious two-course meal (inclusive of all drinks), and topical conversations and presentations.