Ormond Celebrates Past Glories in Style

It was the most successful period in the history of the Ormond Amateur Football Club – 1985-1990. This six year period netted a total of nine premierships – five A Section Senior premierships and four A Section Reserves premierships.

Current Ormond players and supporters were joined by 61 of the 92 former Ormond premiership players for the ‘Celebration of an Era’ function held last Saturday evening. In total, 255 of the Ormond faithful converged on the home of football, the MCC Members’ Dining Room at the MCG, to hear stories and watch footage of highlights from this golden era of the Club.

The VAFA’s legendary coach, and coach of the five A Senior premierships, Mike McArthur-Allen, delivered an enlightening account of the foundations for the Club’s incredible success during this period. He was followed by four time premiership captain, Russell Barnes, who spoke of the uncompromising and ruthless style of play of the Ormond teams of that era, whilst Tim Stewart, the Club’s games record holder and multiple reserves premiership player, provided a humorous account of the wags and personalities who combined as premiership reserves players.

Other highlights from the evening included the parade of the five premiership cups by each corresponding year’s best & fairest player, the two video presentations produced by the VAFA’s expert media man (although not for long), Andrew Leonard, and the club song sung with much gusto by all 255 guests to round out the formalities.

The mood was celebratory and expectant, as the current day senior and reserves players strive for their own piece of history this season. As Mike McArthur-Allen said in closing, “Look back with pride Ormond, as you set out from this point forward to create your own history”.

But the night would not have been possible without the vision, planning and execution of the organising committee – Greg Hammond, Steve Araons and Pamela Simon, the incredible quality of the sound, video screen, and lighting coordinated by Steve Keleher, the energy and perseverance of the table captains, especially the ones tracking down and encouraging past players and officials to attend, the sponsors and donors of loud and silent auction items, the energetic auctioneer, Chris Hassell (Buxton Bentleigh), the people and organisations who contributed to the decorations and props on display, Leo Dalton for his photography, and of course the expert master of ceremonies, Mark ‘Dos’ Anderson.

An enormous thank you to all people who attended and contributed, especially those who travelled from country regions and interstate. It was truly the ‘night of nights’ for this great Club.

The four main speeches delivered during the function are available to read (click on the links below).

4. Tim Stewart, multiple reserves premiership player – The Reserves Supremos
A minute video was prepared for the evening, which included highlights from the five A Section premierships, after-match player interviews, and reflections on the golden era from Mike McArthur-Allen, Russell Barnes and Phil Kingston. 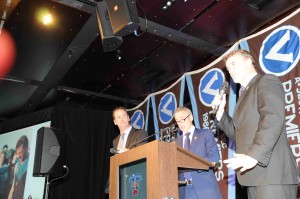 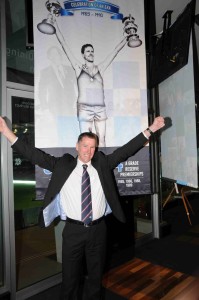 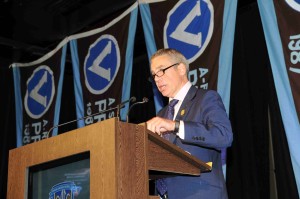